First week on the bike 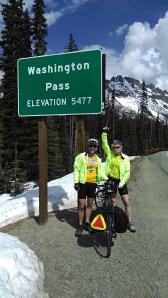 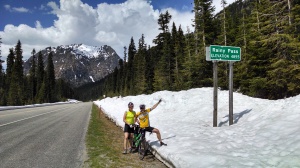 Left Bellingham at 7:30am and rode down to Marine Park to put our rear tire into Bellingham Bay (Pacific Ocean) and began our journey on the Chuckanut Drive – a beautiful road adjacent to Bellingham Bay with great views. Met up with the first cross country cyclist about 20 miles into our ride – he was heading to Boston and was from Scotland. We rode together for awhile and then crossed paths again later.

Continued on our journey and enjoyed the beautiful views and the flat terrain with a tail wind. Met up with a second group of cross country cyclists from Indians (2 women and a gentleman). They were going as far as Fargo North Dakota – I don’t know why you would stop at Fargo but, to each their own.

Tracy said this was the toughest thing she had ever done- she woke up not feeling well and continued to feel worse all day – she was having trouble eating or drinking anything which did not help give her the power she needed to go over the pass. We spent a total of seven hours on the bike with 5 hours of climbing. It was a definite character building ride!!!

The route was difficult but definitely gorgeous. We had two young ladies who are biking across the US in our campground the night before – they took off about an hour before us and we actually caught up with them about two hours into our ride. They were struggling more than us, hopefully they made it to their ending point.

After climbing for five hours we went over the other side and dropped like a stone into Winthrop. I don’t think we pedaled for 20 miles, it was great and the views were spectacular. It was a wonderful end to a tough day.

Weather was warm, sunny 50 -80 degrees with a nice tail wind

Today we biked over the Loup Loup Pass- (4,020ft). It was an easier pass but was a fairly steep one with 12 miles straight up to the top. We met up with the two girls again (they are from Chicago and just graduated from Baltimore University and decided to bike across the US – Vivien and Abbie) from day two at the campground that night. They obviously made it over the big mountains and over Loup Loup as well. We all agreed it was a very tough ride up to Rainey and Washington passes and we hope the others won’t be so tough.

Were glad to have a shorter day today after the day before – Tracy was feeling better but still a bit under the weather.

We got going early today 7:00am because of the anticipated climb to Wauconda Pass(4310ft) First stop was in Riverside about 10 miles into our ride – we stopped at the local coffee shop/convenience store where all the locals met to drink coffee – very nice people we stayed and chatted for quite a while. We continued towards Stone Mountain which was a smaller mountain – only 2,000 Ft easy ride over. We then headed to Tonasket pretty much down hill. Very different views here older mountains and flatter, also different vegetation – more pines – but still beautiful.

From Tonasket we started our climb to the pass – it was a much easier climb less steep and some flatter sections – still had 24 miles of uphill today. Got to the top of the pass and the one store available was closed. Thank goodness our sag vehicle (Peter’s mom Ruth Flucke and partner Rod MacKenzie our going over the mountains with us with an RV – it has been great to have them along and they have been taking great care of us.) We were able to get some more water, snack and take a break.

The ride down the mountain was again very fun and we made it into Republic the last 19 miles in just over an hour- the downhill almost make up for the tough climbs!! Got into to Republic and found a great micro brewery – had a couple of beers at the Republic Brewery – very good Stout and Porter – then rode the rest of the way to our campground – 3 miles away. We rode on our first bicycle trail of the trip from town to the campground – very nice old logging railroad route.

Tomorrow we tackle the highest climb over Sherman Pass – hopefully it will go well although I think our climbing legs are getting stronger!!

Today was the climb over the last big pass – Sherman Pass( 5,575 Ft) We climbed the 18 miles over the pass at an average speed of 8 miles per hour. Got to the top by 10:00am and stopped to eat early lunch and wait for our sag vehicle to put on more clothes for the cold downhill ride. As we were waiting an RV pulled up – not ours and a family from Alaska got out – we talked with them for quite a while and discovered the woman(Judy) was invoked in the Delta Junction Trails Association and they were looking at doing a bicycle and pedestrian plan. What are the odds that a potential client from Alaska for We Bike should show up at the top of a mountain pass. They were on a three week vacation and were heading home – very nice family.

Shortly later our sag wagon showed up with warm clothes, water and food. (thanks mom and Rod!!) Then we headed down the other side of the mountain – which had a 6 percent slope for 6 miles – we hit 45 miles per hour on our way down – very fun and beautiful. We were traveling on a road directly adjacent to the stream coming down the mountain to the Columbia River.

Spent the night at the Stevens county fair grounds, lots of other campers. We met people from all over – including a gentleman who was really into bicycles – Peter had a good conversation with him.

We have one more day in Washington state – the roads have been great and well maintained. The drivers here are incredibility courteous. Bicyclists are part of traffic and are seen and respected – nice for a change!!

We are hoping for more consistent internet connections in the future – in the mean time feel free to follow us daily on Facebook at WE BIKE, etc. We will also be trying to put up more pictures and video.

About Tracy and Peter Flucke

We inspire people to explore the world by bike and foot through our cross-country bicycle adventures, and our book, “Coast to Coast on a Tandem.” This blog details our past trips and provides updates on our current adventure. Enjoy the ride! Tracy and Peter Flucke
View all posts by Tracy and Peter Flucke »
« Previous post
Next post »

7 responses to “First week on the bike” 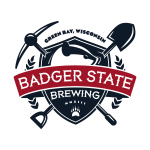